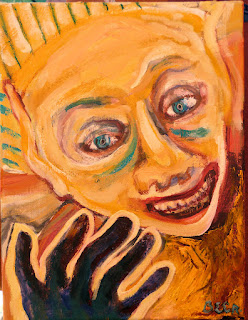 This isn't what I meant to upload but here it is... work on the seraglio continues, looking more and more cute, desperate, have left to dry and will attack another of the back of a woman among the Iris's, dunno why.
Posted by vanilla beer at 01:34 No comments:

Email ThisBlogThis!Share to TwitterShare to FacebookShare to Pinterest
Labels: Iris a mystery sigh 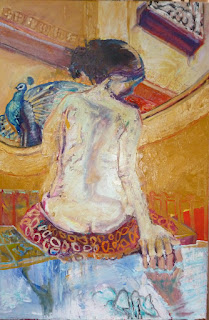 Same song in my head for days; 'out of the land of shadows and darkness we were returning towardsss the morning li-hhhihight'. Suddenly (at drawing this morning) it changed to the battle hymn of the republic,' mine eyes have  seen the glory' etc. Filled with happiness. Had to leave the room to try and trace the track of the change and what it presaged. Lo! I know what to do about the seraglio picture and its not what I thought, all the studies for the proposed changes have to go. So much bloody paint on the thing, may have to start again. Its the point that she is looking backwards, its the backward look that causes all the disasters and that is the paintings topic. The far-too-cutesy head must be turned and looking at the hands. Back to the drawing board.
Posted by vanilla beer at 04:34 No comments:

Email ThisBlogThis!Share to TwitterShare to FacebookShare to Pinterest
Labels: singing a new song

Huge break mostly due to absence from internet connection - no big deal, writing in the wifi'd cafe down the road. Caffeine charged. Been working well after the last visitors went, had several clear days and a head full of notions. One finished - no up-loadable pic as yet - which has delighted me until this morning, when it seemed that the subtle and enchanting complexities, hard-fought, were rather simplistic and perhaps, horrors, decorative; plus the paint seems to have sunk. Photo to follow. Have been photographing stages which put some of the issues dealt with into perspective...
finished a little mythic anomaly which charms me too - another recipe for disappointment no doubt, haven't seen it today. Have seen the pic which has been my fight for three weeks, its a nude's back seated in a seraglio, with a peacock and a rat and a hand reaching out to be lifted or drag her down - contact with the dead, an Orpheus and Eurydice moment - wanted to call it, we were returning towards the morning light but that aint right, really. Bits have been perfect and Ive changed sections to match and then had to change the perfect ones, its like climbing a pyramid, I know I can get something tremendous out of this but then I always feel that and am continually dashed, half-an hour after completion.
So, business as usual.
Oh except have agreed to exhibit in London and Helen and Tony Othens gallery in Greenwich - September 2013. Sure I'm not ready but cant keep farting about for ever- three years on this new series and there is certainly a good choice of pix. By late 2013 should have a decent little catalogue.
Posted by vanilla beer at 01:46 No comments:

Email ThisBlogThis!Share to TwitterShare to FacebookShare to Pinterest
Labels: seraglio in pale green up the spine? Perhaps

Deathly silence, but brain stuff happening; many visitors but have tomorrow and Friday, maybe the weekend too, in the studio. Been drawing. Badly, so that must mean movement and change, lala, it would be good to have a result for once. Have three clear ideas entirely based on restrictions. Maybe its time to list restrictions and select a handful in the morning, or before bed to think about in the night.
Posted by vanilla beer at 01:46 No comments:

Email ThisBlogThis!Share to TwitterShare to FacebookShare to Pinterest
Labels: too much frfeedom makes you flobby

Been in Spain all week - a day-and-night in Barcelona thence to Seville and back, all by train.

The journey had its adventures but the first real shock was getting onto the terrace of Hughs flat which we were renting for the week.  It was on the fourth floor in the middle of the old town and clearly visible, level with us and down a bit, was a statue of Hercules on a pillar.

I'd been dreaming of it, the statue- even talked about it, because I didn't know how I knew it was Hercules and thought  I'd seen it on a postage stamp. (Been looking at the stamps I have defaced to make the World King series and thought it had emerged from that.)
It was ominous there, looming, ugly, it scared me. It already had an importance in my mind. The terrace gave me vertigo - that is to say, I have vertigo and the terrace was high up - and the worst thing of constant vertigo, apart from the physical symptoms, is the urge to jump. Was this a presage of my suicide? Naturally I had to keep reminding myself not to self-fulfill, whilst at the same time trying to come to terms with killing myself.

Bravely I slept on the terrace for a few nights. Felt more in charge. Then the flying cockroaches arrived so I moved indoors. Unpleasantly hot or cold and windy with aircon on.

The one repetitive idea was about wind. In a hot and airless place, it would be.  Finding that the Arabs had twelve names for their twelve winds excited me though I couldn't find out any more. The little wind at night was like being played with by a beast that battered around me - impossible not to personify it - so representing these winds and trying to understand an historical relationship with them kept me awake. Seeing their shapes in the architecture ditto.

The art of the galleries was not terribly special though there were many little pleasures, chiefly Jose Villegas Cordero, La Muerte del Maestro, 1913 (death of a bullfighter; he is on his bier in a chapel which swarms with bullfighters - gorgeous) and Lucas Valdes, Retrato Milagroso de San Francisco de Paula, c.1710 (in which an angel completes the artists work, using the artist as a model as he lies exhausted on the floor -:)  )))
They were hanging in the Bellas Artes de Sevilla, pleasantly cool, large and empty-of-people place. At the Centro Andaluz de Arte Contemporano  I enjoyed Ruth Moran and her large black papers with twitchy lines on 'em, worked well, (Psychographies, she calls them) and Jose Pinar who stacked around a hundred canvases so you could see that they were paintings though not clearly - called Greatest Hits, 1992 -2012, unsold work and nicely ironic. Laughed a lot.

Trouble was that the building is an old monastery and quite quite fabulous so art has competition there.

Most memorable time was the last night in the gardens of the Real Alcazar, where Marino Pardo sang to Juan Carlos de Mulder's guitar. She was floodlit in crimson against the hysterical green of a huge hedge, sang like something inhuman, the winds started playing...

Been back for two days and haven't got near the studio. Nor will I be able to tomorrow - have to pack up some stored work for repairs to the space they are stored in - trying to keep calm. Maybe Tuesday.
Posted by vanilla beer at 10:42 No comments: