morning drawing... Chantal modelling. Felt good though results frightful Thirteen artists there, lots of them extremely good and challenging which helps; and doesn't, of course.
Sat next to J who started puffing and snorting and scratching as if his pencil was chalk on the blackboard. Got sweaty teeth. Managed to move away between poses and after that it was very paradise.

Posted by vanilla beer at 15:29 No comments: 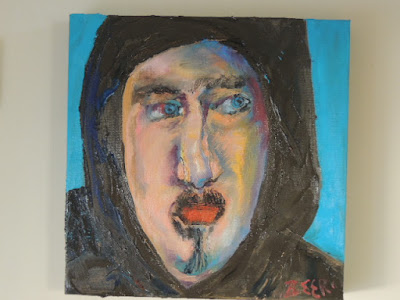 St Peter Regalatus; Franciscan educated in Valladolid, gifts of bilocation, prophecy and miracle working . Exhumed incorrupt in 1782 ( so he'll be around somewhere, I could go and see what he looked like) 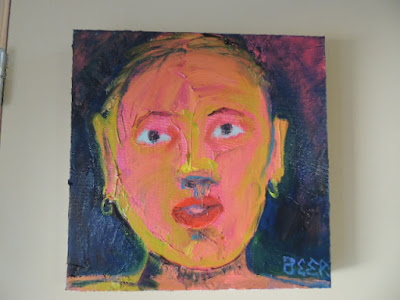 St Devota, member of the household of a Roman senator, imprisoned, tortured and martyred on rack c. 303.

Posted by vanilla beer at 08:39 No comments: 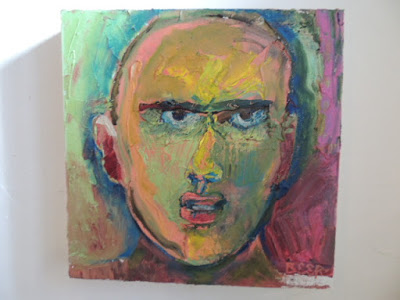 St Agileus...a martyr and companion of St Augustine. He lived in N. Africa and was martyred in Carthage. That seems to be all. But any mate of Augustines is bound to be, erm, forceful - he certainly dictated this image (or something did)

Got trouble with Zita, so overworked as to be porridge, and Felix, co-hermit with Votus and John. He persists in prettiness and its too camp. 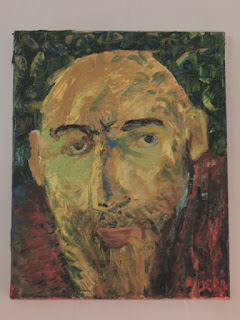 Spent the day by the sea looking at dead jellyfish on the sand.... mist and low cloud and rain, perfect.
Tweaked this later; finished.
Posted by vanilla beer at 13:55 No comments:

Finished - possibly - a hermit called John.
I can tell when these things are finished when they start to communicate in some way - become recognisable as the person I think they were, which is often improbable.They start answering back. Half-baked notions ...begun at drawing (Ian modelling) when I used a Pope Francis biro to see if that would make a difference.
---Immeasurable, of course.
Really sad today, dunno why. Autumn - things ending - suddenly no energy or delight. Despite it being actually a good morning, nice group, old friends and one new artist who was very pleasant. Fear I was the only disruptive influence. Ian worked really hard.
Afternoon painting came fluently.
Taking tomorrow off to go to the sea.
Posted by vanilla beer at 10:01 No comments: 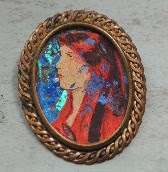 After all these years, found a Fabiola!!! How appropriate that as I embrace the painting of saints, one should (finally) turn up. Been looking since 2009.
And this one (2" in total) is as distressed as my paintings aim to be - and as intermittently shiny-  from a vide grenier on our local sacred mountain, Bugarach. Nice:)

Apropos...
the question underlying the Saints series is one of attribution.
All artists and probably musician and writers and for all I know pastry chefs enter into another head space where things are made. You know what you are producing is OK when you come out of it and see what has emerged. Nowadays I've heard it called The Zone. There are other names. But at one time it was called inspiration and  sometimes divine inspiration.

So; who does the work? The unconscious kicks in with the hard-wired motor skills? Picasso claimed - somewhere- that he felt the presence of all the artists who had every been painting through him. Is there an art pool where it comes from?
... join the dots, these questions and those that follow on are not original but I've never seem answers that have satisfied.
One of the Catholic sites I visit to check out saints refers to them (saints) as our extended family in heaven. Hope it ain't them doing the work -
Which is ticking  over fairly well BYW. Half a doz coming up for completion.
Posted by vanilla beer at 05:22 No comments: 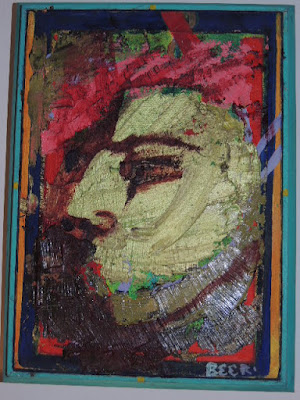 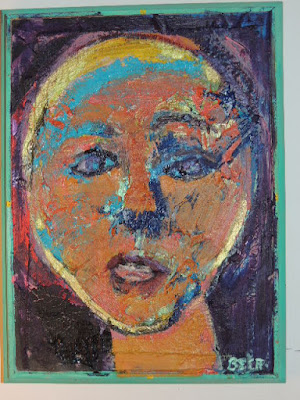 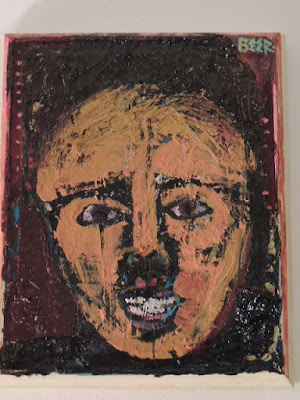 Done... others trotting along.

Drawing Mamadou this morning, hes a beautiful man. Was tempted to do a portrait but anchoring myself on a particular human would never do. His proportions are so weird, terribly long with stick legs - don't know his background but the phrase Bushman of the Kalahari was going through my head all morning. Since he's french, this is improbable.

Posted by vanilla beer at 12:48 No comments:

grinding on - thats how it feels at the end of this day anyway. hard work. Plus the incense I persist in burning set off the fire alarm and disturbed me dreadfully - it seems you have to dismantle them to stop the terrible noise -   but hey. Things are moving on. Not finished though. 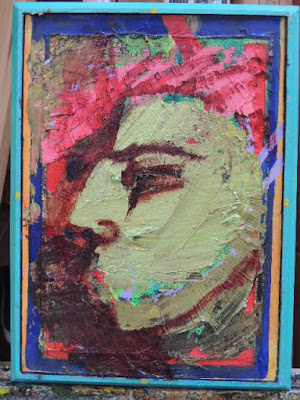 so, St Volusian, Bishop of Tours, d.496; chased by Arian Visigoths (?) into Spain though died in Toulouse. He had a nasty wife. 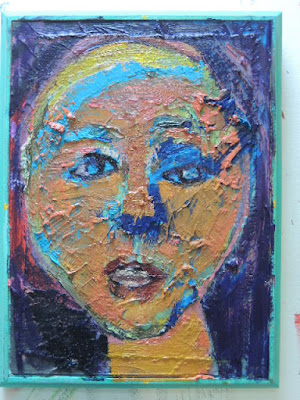 Heres  St Lydia of Thyatird, called Purpuraria because she sold purple dye for a living. St Pauls first convert in Philippi.
St John called her an 'angel of the church'


And St John, a hermit of the Pyrenees... (he chummed up with Votus and Felix of Saragossa of whom more, no doubt, later) They lived in a hermitage that became the abbey of St John de la Pena. 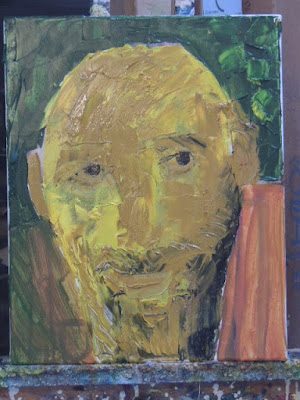 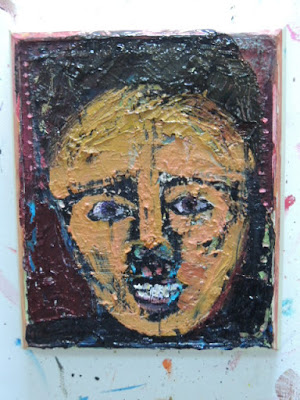 St Vulpiax, a Syrian executed in Tyre under Diocletian, 284 - 305 by being sewn into a leather sack with a snake and a dog and hurled into the sea.

All rather dispiriting, pondering these folk...

Rang Oumough, wants to keep the work on expo till the end of November when hes hiring out the gallery to writers or booksellers, can't remember. Terrible year for him, no-one rich left in France. Dawns on me that I have a history of beginning to do well just before a major financial collapse.

Posted by vanilla beer at 08:59 No comments:

Got back yesterday, wrecked - still am - lot of trouble breathing in the UK which got worse the norther I went. Can still taste the place. Horrible. Lodged in my sinuses.

Anyway, back. All behind me. Survived.

And today bought 11 box canvases 30 x 30 as Bob says I should carry on in the same size - as does Oumough - despite that fact the series already has a number of different sizes. It suits me though, does 30 x 30.
Studio been OK in  my absence. Still standing and slightly humming with latent energy.

Lots of bits and pieces to catch up with in general maintenance and so forth - and Yuri arrives tomorrow for a week - but will no doubt start work again soon.
Posted by vanilla beer at 09:30 No comments: