...to say that all is quiet is to redefine inaction. Last couple of days - last day and a half, say - spent of the computer, getting submission for artistes a suivre together. Found myself enchanted by the addressing of the envelope to self, for the results to be forwarded. Allowing for failure and  expecting it.
Still, still - nothing else can be done. I have drawing tomorrow, possibly - may not go - and then its off to Blightly. Resolved to use the time in galleries and with artists. It aint work but it'll sure inform it later.

Posted by vanilla beer at 14:20 No comments:

Email ThisBlogThis!Share to TwitterShare to FacebookShare to Pinterest
Labels: inaction as a way of life

So, plumber arrived - only an hour late - and worked till lunch, which I prepared for the team. It was therefore afternoon before I could hit the studio. Fortunately it was raining or I'd have fled to the hills; instead in an excess of physical energy I cleaned the studios. One room is finally done, done enough to actually hoover - many years since that has happened. The other, perhaps, will get attempted soon. But only if I run out of other choices. Tomorrow being Thursday is house cleaning and french lesson and domestics in general. I may give up this fight as I'm leaving for England on Tuesday for 2 weeks - doesn't seem worth starting anything new, except if I don't I may go mad.
Would like to get some more drawing in before going.
Posted by vanilla beer at 12:33 No comments:

Email ThisBlogThis!Share to TwitterShare to FacebookShare to Pinterest
Labels: nothing done but clean studio

The central heating engineer couldn't come and had the grace to phone me - so I headed for the hills and was drawing by 10.30. Made it to three sites and by the third was too tired to do anything but stare into space. Made it home by 4.00 and slept till 6.00. Trouble with drawing like this is I only get to do a bit because I'm knackered by the climb to the site. And the heat - ah, the heat! Had to take the sunhat off to dry my hair because it was soaked in sweat. But glorious really, I'm sunburnt and achy tired but happy though anxious that I have only 4 drawings to show for today and 3 yesterday which doesn't seem a lot to me. What should an output be?
Posted by vanilla beer at 11:58 No comments:

Email ThisBlogThis!Share to TwitterShare to FacebookShare to Pinterest
Labels: ink drawing in thehills

Perfect weekend, enjoyable, relaxing; with glad heart I made it to breakfast in the cafe this morning before going to draw at the MJC. Nessim was going to model and he's a pain but I often get good results from having to deal with whatever it is about him that is annoying on a particular day - like, normally he's just snotty because he knows hes a better artist than us, which is fair enough, but other times its other things. Today he was both stroppy and playful, refusing to pose as asked and doing other poses instead, etc. Began by farting around between poses so instead of a continuous and concentrated flow there was a staccato effect which got increasingly frustrating. Julian stormed out eventually leaving a cloud of anger behind him. I could barely talk through my gritted teeth.

Bloody model more interested in himself  than tool of artist. He is PAID to model.

Was  reminded of myself as a young painter - 19-odd - attacking a man called Gary with a palette knife because he kept messing about whilst modeling. Recall I was frighted by my violence and spent subsequent years suppressing and redirecting this type of frustration. Find now I am awash with anger.

Trying to calm myself I had used a very light pencil, 3H, and tried to keep my marks without distinction of depth. So I learnt that - its a good way to focus on the line. I always try to add too many tones - as I try to use too much colour - something learnt.

Afterwards, full of  frustrated drawing energy, I took myself up Rue Dr Clot with a knapsack of sandwiches, water, a portable stool, paper, ink, watercolours, sunhat. Decided to grind the ink because its so calming.
Managed from 1.30 till 4.00, came home and slept dead out till 6.00. Then carried on cleaning studio.

Lovely up there - views to Montazells, Couiza, various mountains. Got into a hedge so sun not too hot, comfortable with my back to the hedge, no-one around. Except Tony, whom I met on the walk up, all quiet. Felt better. Landscapes change but delightfully and not because they have set their will against yours... (I don't think)

Got person to service the studio heating tomorrow but hope to return to the mountains tomorrow - would like to try working from the top of the Butte St Helene. Views over the world. Now red wine is calling.

Posted by vanilla beer at 11:18 No comments:

I knew it I knew it I knew it. Was too stupid to do anything about it.
...That the cafe l'Origyn'l was a daft place to put a painting that I cared about. Nonetheless I have been putting paintings there regular as clockwork, two littles and a big, changing every couple of weeks. I have only done one painting that I really like this year and that is the one that was damaged by a gust of wind throwing the easel over and going through the canvas. Its the hen-woman nude, BTW. Anyway I can repair it but its unsaleable, if it were ever likely to sell.
Its just that I knew it....
Posted by vanilla beer at 08:57 No comments:

Email ThisBlogThis!Share to TwitterShare to FacebookShare to Pinterest
Labels: easy in retrospect but really, I knew it 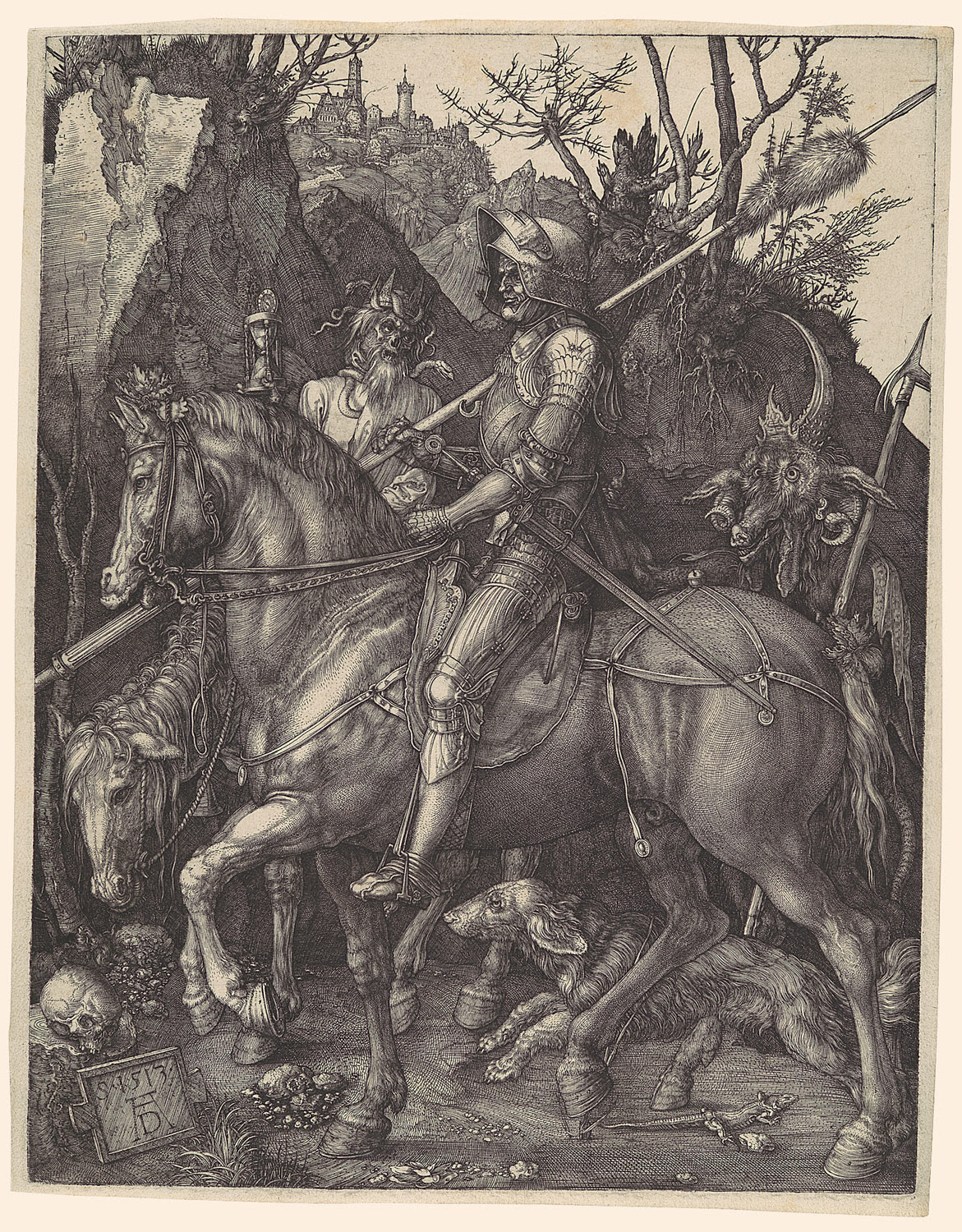 Still cleaning studio.
Whilst ripping and binning bits on walls discover a dearth of Durers.... this pic of Death the Knight and the Devil is there, an old photograph nicked from my great aunt. Always liked because on the one hand there is a lizard getting out of its skin and on the other a skull. What was AD saying?? Was it heretical? Then there's  a reproduction bought in the Prado - or  Reina Sofia or Thyssen, I forget-  of a leopard or some form of cat. And many more I carry in my heart, for two reasons: one, the use of symbols and two, he's imperfect. Often. You can read the struggle and the result and judge if the endeavour was successful. And of course, that self-portrait... which girl didn't fall in love with him?
Had those praying hands on my wall as a child and of course the hare. Wonder which of my parents put those up?
Preferred the pleasure of the Vermeer on the wastepaper basket, possibly because it was on ground level and there was a sense of ownership.
Wonderful feeling, clearing the decks. Gesso'd 2 canvases and a board while I was at it - tomorrow bringing the last series to date to the studio for storage, hence clear out to get space to get stuff together. Currently chaotic though.
Below are drawings that informed the last painting of nude with black bird. The thing that looks like a pantomime carriage really is from the hat museum. 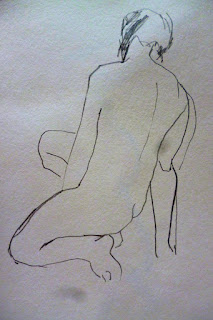 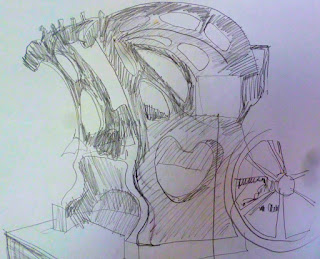 Posted by vanilla beer at 12:40 No comments:

Email ThisBlogThis!Share to TwitterShare to FacebookShare to Pinterest
Labels: cleanliness is next to Albrecht Durer

Been laid up for a couple of days with some sort of bug - nausea,cramps, temp variation, sleepiness. Apart from the unpleasantness and a tinge of fear, quite nice dreamy state which I'm hoping will pay off. Good dreams, useful visions.
It set in on Monday morning. Had to leave drawing mid-way, was frightened of throwing up or passing out. The drawings are tense and resourceful - perhaps. I'm still not quite well.
NG-C has died, Peter D is just out of intensive care, had a terrible summer with Bob. Emotionally hammered. That would do it then - lucky if I get off with a couple of days:)
Posted by vanilla beer at 12:38 No comments: