Started work a little late yesterday, unsettled by the proximity of my American guests.
They left last night but spent the day packing and cleaning and I was aware of them and their emotions (they leave their child here to an uncertain life -) Remembered my family and what it was to live in a miasma of love. Their presence has made me miss my father even more and maybe be a little kinder towards my mother. Stopping myself phoning my brothers and being sentimental.

Most of the day spent fiddling with Mondays drawings, determined to achieve that state of otherness when it takes off on its own - but tweaking is tweaking and that'll never happen. Don't think any are useful.

Between times ran at the long thin picture of a sanglier, a cat and a Janus. Not really a Janus, just two-faced; male and female; just a plastic decision, as is all the painting. Back to thinking that painting is a verb, stop thinking about it, get on and do it. Commentary ain't my metier.

Quite liked it when I stopped at 6.00pm, haven't been to the studio this morning so don't know how it is really. Pouring with rain, light awful. Probably devote the day to the Ripley scroll, which hasn't had attention for a time.

Later; finished a Ripley scroll panel and turned to the picture below, which got some work. Was dealing with the negative spaces which don't work too well in the centre and in the process added a line of yellow to the cats eye. A shock of joy resulted; overwhelming, total, blissful. So I stopped. So did the pleasure but it existed and I remember - like some of the painting and not other bits but there it stays. Back to Circe now or at least after lunch.

Posted by vanilla beer at 00:14 No comments:

Drawing, it being Monday; Ceri modelling. Haven't been for the last few weeks due to absence and accidents. Found it an unusual pleasure though struck by a couple of things...en route, took a coffee with Olle-Bendik and whilst in the cafe met Yvonne. Said we were off drawing; she said, but you can already draw, why do you have to do it again??? No need to answer that one but the refrain stayed with me as I worked and realised that the other artists had refrains batting about their heads too, just out of ear-shot - a bunch of neurotics chattering away to ourselves. Calm and contented until the end when things took a turn and started to go really well - I felt that suspension as something else begins to arrive, breathes down your neck - which was when Pierre began to prowl and peer noisily over shoulders not reaching me but inducing a state of actual terror which blew all the rest away.
Which came first? Do I become available to interruption and invoke the *muse* or does the muse attract the interruption? Very conscious and carried on despite ferkkin up the page terribly. Must learn a way of  dismissing self-sabotage. It could be a function of the panic of time - there are only 2 hours in the session. If there were a lot more, it might be OK. My concentration shouldn't be so frail.
Posted by vanilla beer at 04:34 No comments:

Yesterday a total horror as I understood profoundly that my work is embarrassing rubbish; my life has been wasted and nothing is salvageable. Had this sense before but never so completely.
Worked on the Ripley scroll copy which at least absorbed some energy (and went well in recompense) and by the afternoon decided to take the train to Carcassonne and see if a change of air would help decide what to do.
Sleep has been disrupted lately over the Circe painting and still is - been awake since 5.00am this morning - but this morning realised that it really doesn't matter. Ok, so its crap; so what? Who cares? There is nothing else I can do or could have done with my life. I might have gone off and done good somewhere but it didn't work like that. And I've met some wonderful people and had wonderful experiences that belong firmly in the art milieu.
(Its just occurred to me that this may be a backlash from the Chemin rejection but having thought about it fairly sure it isn't)
The Carcassonne trip didn't help any, just gloomy and lonely. Did manage to photocopy the posters for the show at Quillan - having trouble printing and copying ( machine failures) so this at least is one less thing to fret about. Did them in B and W and pleased - used an entertaining image. Hoping that its not this little expo that has tipped my balance.
This mornings resolution is one way of coping. There is nothing else I'd rather do. If I'm no good at it, well -  can't be helped. I've done my best. Can try harder and will though today I have declared a holiday.

Posted by vanilla beer at 21:58 No comments:

Email ThisBlogThis!Share to TwitterShare to FacebookShare to Pinterest
Labels: day off

effective morning - started early, studio at 8.00 after watching stupendous dawn  by the river - pic of circe going well. Photographed and posted stuff on www.thishumanclay.blogspot.com in the hope of encouraging Ian to address the site. Horribly dispiriting. Lunch now then I think head for the hills with a drawing book.
Posted by vanilla beer at 04:02 No comments:

Email ThisBlogThis!Share to TwitterShare to FacebookShare to Pinterest
Labels: effective but dull

Being Thursday, the day is disturbed... builders 9.30, another 11.00, femme de menange 10.00, Steve leaving for Zurich, lunch to buy and cook - Andree at 3.00 and frankly knackered afterwards. Pity as yesterday was quite good... finished 2, neither bad though not shattering. Cant up load them as camera set on many pixels and too rich for the site; will find out how to change it and re-do. Started more with sanglier central to the theme, like them...
yesterday, rejected by the Artistes a suivre jury, which though expected was still a funny one. Years since Ive been rejected from anything - a lesson in playing too safe? Content to join the illustrious company who have previously been chucked out but a little surprised as the 10 images I gave them seemed very accessible and painterly. Not taking it personally anyway.
On the plus side Molly has suggested an expo in Nice in the spring. A fine plan. Will visit and check it out, next week I think - if I can get the invitations to the Quillan expo sorted. Having trouble finding an image I like that reproduces well.
Am trying to get Ian to re-do website, it seems he has no work pattern or any sort of discipline. Cant find out when - or indeed if- he might achieve anything.
Phil and Lily still here, another week, though they sweetly don't intrude. Hard to focus with activity about me.Should try harder, like as not.
This one has fewer pixels than others - pity its hardly visible - 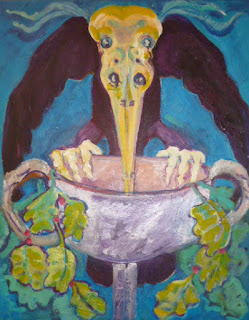 Posted by vanilla beer at 09:25 No comments:

Email ThisBlogThis!Share to TwitterShare to FacebookShare to Pinterest
Labels: rejection and continuation

Back, but due to friends staying still not actually back at work. Had rather a fruitful time in London though. Saw brother Mark, always stimulating- Vina and David at 291 and friends at Benjamin Rhodes 60th at the Royal Academy Schools place, lovely -
Set myself no tasks and went from gallery to gallery taking notes. Discovered a lot about what I like and what I hate.

Art of Change at the Hayward. Hated horribly. Destroyed my day. Excellent work that communicated despair and loss of will to live. Easily caught. Don't want to think about it anymore.

Paul Benny under Somerset House. Loved. Very painterly and set in scuddy cellars. Spooky and great. Went to buy the postcards and didnt like them - realised it was the setting that did it.  Not entirely, of course - perhaps reproduction is difficult. Looks good on the site, mostly.  http://www.paulbenney.com/home/

Also at Somerset house, John Virtue - between the gift shop and the toilets -  a bunch of monoprints done from the roof of the building of the river. Totally loved them though some were formulaic. The ones that worked were spectacular.
http://www.marlboroughfineart.com/artist-John-Virtue-124.html

Stuff sat Tate Modern as dull as ever - talk about theme park - 12 c Italians at the National as good as ever- spent most of my time trying to find somewhere quiet to look at things and London aint like that.

Did get to the Serpentine before anyone else and  caught Thomas Schutte which was rather disappointing, the work seemed to always fall slightly short of its potential.
http://www.serpentinegallery.org/2011/03/thomas_schutte.html

Took in the Ripley Scroll at the Science Museum - notes on that at http://ripleyscroll.blogspot.fr
quiet for an hour, anyway:)


Drew; drew in ordinary (made-by-me) nasty paper notebook and watercoloured into a very posh and expensive watercolour hardbacked book, which latter pays off as the paper does all the work and the hardback makes it easy to control. Had to leave them in London because I couldn't get them onto my cheap flight but feel quietly confident and have a newish sense of direction. Having said that, got back to another notebook that Id been feeling quietly confident about and its crap.

Walked to the Barrier in Greenwich and missed Vong Phaophanits' Ash and Silk Wall,since destroyed by lorry drivers taking the piss. Remembered the launch;  how a new future seemed to be unfurling. Ha!
Posted by vanilla beer at 00:35 No comments: 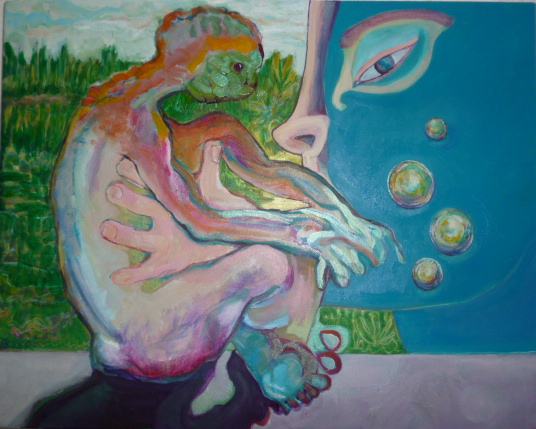 The Dream of the Tortoise, finished. And nearly finished others and have varnished many more, some of which need repainting but hey, not today. Got to be entertaining for a few days, then off to London for a week. Will manage. A few days consistent work keeps me sane enough for a few days off - and I can check out the London galleries again.
Posted by vanilla beer at 13:49 No comments: