Suppose there must be times when nothing is learnt.  Yesterday nothing got done - played host to Phillipe for an hour or two, read a novel. Put on the heating, was comfy and content. Towards the end of the day designed a range of chocolates ('Holy Sweet') on theological themes. La la la.

Its all flowing well today though.

Posted by vanilla beer at 11:57 No comments:

so lazy today.... its raining, I was late in bed, now unfocused. Better this afto perhaps.

Posted by vanilla beer at 02:59 No comments: 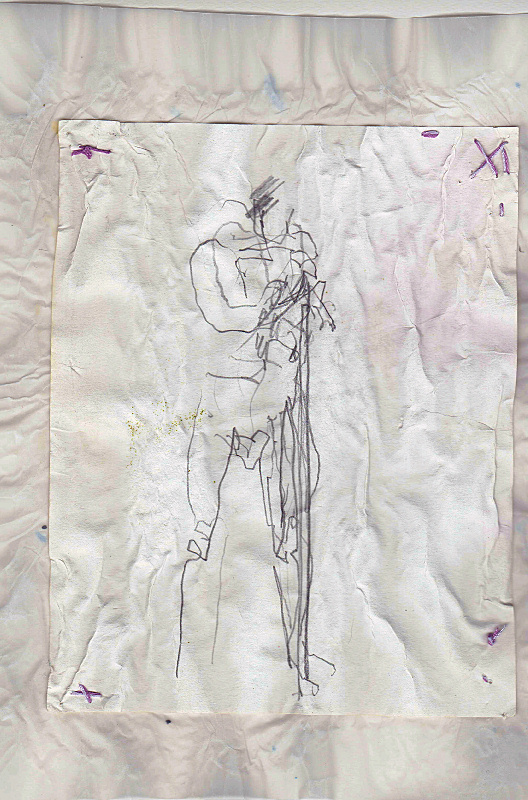 So; interest in Book of Days (see work passim) leads me to try attaching little drawing of Ferren to faux parchment... quite sweet. The real challenge lay in scanning and saving which has just taken longer than making the damn thing.

He appears to be holding a bird.
Another appearance of the white bird?

Painting yesterday not bad - little nudes getting resolved - started a bizarre pic of Thetis taking armour to Achilles. About as faux as mythological painting gets.
Posted by vanilla beer at 02:02 No comments:

Email ThisBlogThis!Share to TwitterShare to FacebookShare to Pinterest
Labels: Ferren with bird

Hey ho, cheered up - nothing to do but paint, what could be better? Fiddling with paper too, used to make books of old drawings and am thinking of doing that though got bogged down in techniques...
Posted by vanilla beer at 00:35 No comments:

Email ThisBlogThis!Share to TwitterShare to FacebookShare to Pinterest
Labels: life goes on

One of those days. Left early for drawing, MJC closed for building work - open on Thursday. Couldn't contact O-B, trotted off to Maire, very helpful but need policemen Barry. Not there. Long and boring story culminating in getting into the space by the footbridge and managing an hour and a half  drawing with Fabinne, the results of which are meretricious.
So that was difficult and depressing... got home to the arrival of the docking port for new computer - succeeded only in closing new machine down, so all that has to be addressed when its up and running again in approx 2 days.
Getting more nervous about the drawing year application and no machine so at the end of a miserable day I opened email in the old computer and saw a message there, cant be opened because of the nature of the problem with the old computer... so rang Kat who let me use hers where I got the usual thanks but piss off notice.
Initially a relief - don't have to do it:) - later paroxysms of doubt and sense of failure.
On the plus side, the little books of the new work have arrived at Bobs and hes enthusiastic about them. Hes unlikely to be critical, however.

What now? I just don't know. I'd applied for this course because I'm empty of solutions and looked to the outside world to provide them.Or at least give me an arena for debate. Now I either have to give up or search myself with more... rigour? I dont know. I am on empty.
Holiday in Italy in a week,will take my emptiness and see whats there. Bloody depressed now.
Posted by vanilla beer at 00:19 No comments:

Email ThisBlogThis!Share to TwitterShare to FacebookShare to Pinterest
Labels: depressed 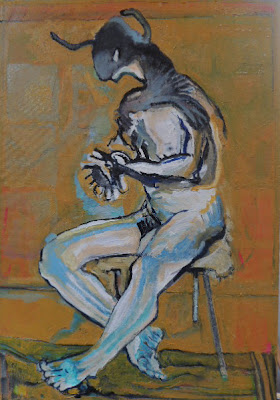 Think this is poorly reproduced - cut the no of pixels on the camera - it actually quite interesting. The others are straighter but are also holding my attention. Very ambivalent about the eros and psyche, its dreadful. Will take tomorrow off - market, party - and reconsider on Monday. Whole subject too dodgy for me, the souls animation through sexual recognition. Too naff.
Posted by vanilla beer at 10:31 No comments:

Its getting better... painted out the bars and distant view from the ant/bull (too corny) and he just sits there ---- I like it more because there are internal rhythms that are pleasing. The other nudes are picking up too, l'm not contextualising them, they're just copies of drawings. lala.
Barely sleeping though - last night was absurd, I was sleeping in 10 min snatches and then pretending to be asleep and then waking and wandering about or reading or drinking tea - Maybe afraid of dreams, sometimes that happens. Maybe just a change in the weather, the hot bright light has changed today to a much better grey brightness (its raining). Eating a lot - very hungry. Got a large meal organised for an early night tonight.
Clear day tomorrow, yessssss
Posted by vanilla beer at 11:22 No comments:

There will be no work today and a good thing too- yesterday was continuing the painting of four small nudes bases on drawings that were chosen because they were the right shape - as good as reason as any - and was overwhelmed by distress. One of them, a drawing of Ian where the ink had run and made him into a sort of bull ant, morphed into my dreaming of the night before: trying to get out into a garden where an animal was tethered with a collar and long silver chain, just long enough to smell the v beautiful flowers but not to get at them. Exclusion and imprisonment chief themes. So this ant/bull is sitting behind bars, making a cats cradle or twiddling its thumbs, with an air of dejection and dolourness so strong that l had to stop.
Today being Thursday and housework, people for lunch, French lesson, person for dinner, means avoiding the studio though l confess l'd quite like to look....

Posted by vanilla beer at 01:49 No comments: 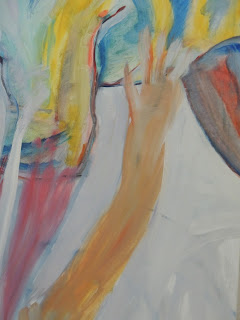 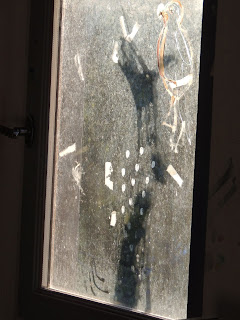 Shadow is caused by an improvised  bird feeder make out of hangers and holding bird fat balls, lopsided after the wind blew it apart a few weeks ago.

In my early morning confusion thought I'd painted it there - as I have the sketch of the bird, the dots of paint, etc etc.Prefer it to the arm painting which is a part of the latest Eros and Psyche which I'm abandoning, probably.
Posted by vanilla beer at 01:26 No comments:

Email ThisBlogThis!Share to TwitterShare to FacebookShare to Pinterest
Labels: art and nature spookiness

Ceri modeled this morning and the results rather pleased me - they were solid and steady, as she is. I used water mostly, tinted with watercolour, touched with pencil and scrubbed with q-tips. No sense of breakthrough but of consolidation, which is enough at the moment.
She started crying towards the end of the session (don't ask) which spoilt the efforts somewhat - remembered Picasso's Madame Z, I think it was called - very mannered piece of woman wailing and teeth gnashing. Tempted but didn't go there. Used to love that picture when I was a girl, not sure why.

Better than last week anyway. The very excellent Jenny was modeling and all went well until a late-comer brought a small dog in with her. Roger immediately asked her to remove it , seems he hates dogs- we all wanted it out, something wandering about is just a distraction - so she closed it into a portfolio where it proceeded to snuffle and whimper. She was asked to put it in her car but wouldn't as her other five dogs would sit on it. Dark mutterings about circuses... at the break I took it to my house, in a vile ill humour. At the end I had to find the owner to get her to take it away - it was howling - and after she'd gone I found the damn thing had shat on my flip-flops.

Sigh. Drawings dreadful, not surprisingly. Certain amount of artists not there today as a result - Bieke, critically (for me) her input is always original. Lost my quick studies, I guess there in the centre somewhere. Don't recall them being any good.

No studio work. Other distractions. Actually, if I'm honest, I'm waiting to have a response from the graduate drawing programme Ive applied for. On the principle that one shouldn't make a decision until the results of your last action are known, I'm a tad paralyzed.  Mind you, fear has the same effect. Rejection! Can I cope?
Posted by vanilla beer at 11:47 No comments:

Email ThisBlogThis!Share to TwitterShare to FacebookShare to Pinterest
Labels: waiting in fear and dread 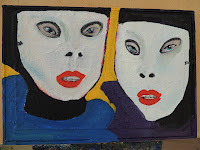 little painting from the studio - having  horrible time painting, rudderless and inept. On the plus side, cleaning up and working on the Ripley Scroll copy. 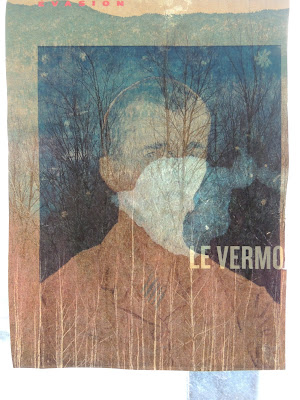 Just love this though.
Been on the studio window for ever... page cut from a magazine of one of Vincents portraits,
oil spill, viewed from the other side. Which is why its on the window, light has to pass through. 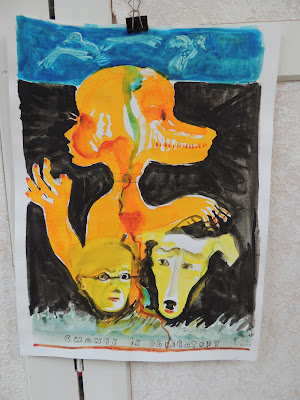 this gouache turned up in the cleaning. Message to self... says 'change is obligatory'. Yeah, right.
Posted by vanilla beer at 06:36 No comments:

Email ThisBlogThis!Share to TwitterShare to FacebookShare to Pinterest
Labels: change is oblibatory

Been drawing at the ravine des coleurs, paradise. Saw a kingfisher. Drawing duff. Painting ditto. On three nudes (Jenny) taken from drawings I like but don't see where they are going, I'm just doing them.
Posted by vanilla beer at 12:25 No comments:

Realising that the painting is only as good as the drawings Im using to inform it, have begun restructuring and NOT using the drawings - both are weak. Which somewhat totally undermines my current modus operandi.
The new canvases arent dry enough to use yet.
So I just bash away at the E and P mark 2 and hope something interesting will emerge.
Because simply being faithful t0 bad drawing is stupid. Possibly being faithful to good drawing is not a lot of use.
Been thinking about retabli - is that the word? The peasant-painted tin pictures of votive thanks or importuning. Real art, magical, touching the gods, informative. Making for the maker from the made.

Posted by vanilla beer at 00:26 No comments:

...The Eros and Psyche  pic mark two looks to me like it should be scrapped. Spent most of yesterday preparing some of the new canvases for painting. Feel I'm missing something and trying  to achieve things I cant. Like, trying to keep the paint sparse, thin, luminous but I'm experimenting with structure on the canvas and have to paint out and scrub the surface which interrupts the process. Think I'm going back to the tried and tested pile-it-on-over whats there. Little bit intimidated by the new canvases I think, spent real money on them and now I'm in awe. Hey ho. Show 'em who's boss I guess. Ha.
Not putting in the time either, starting later and later every day. Gone 9.00 am and I'm not in the studio now.
Posted by vanilla beer at 00:03 No comments: 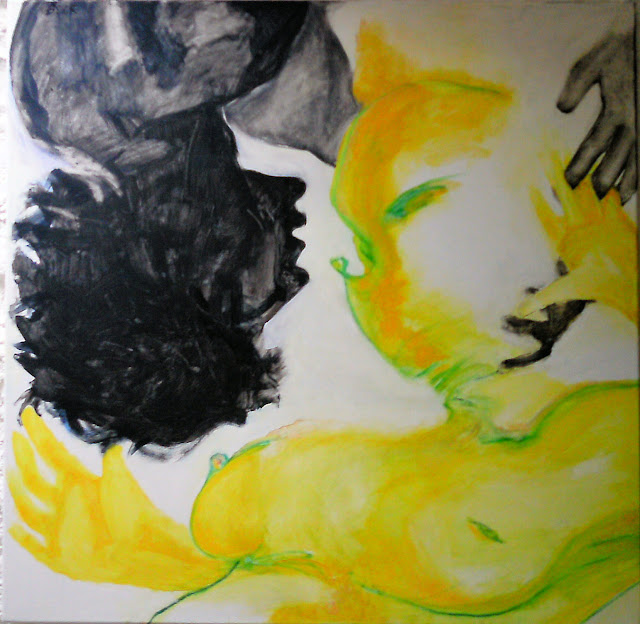 looks rather as if shes about to be lunch... but let it rest. Started on another in the same vein, but quite different. Very interested in the stories... Golden Ass current reading.

Posted by vanilla beer at 04:17 No comments: