On Kitaj, met on June 11th 1963 by Francis Partridge - ; really angered me and made me distrust anything the woman said about anyone.
'... his closely furred face, so reminiscent of Van Gogh, crunched up with badger-like rebarbativeness and aggression. He is not a all a stupid man, however, and interesting though not entirely likeable.'
p.171. Frances Partridge, Hanging on: Diaries 1960 - 1963. Phoenix, London. 1998

So when one of the men in my painting became identifiable as Kitaj, I left him there. The other unknown, so far. After much shilly-shallying have painted in a trampoline and a view of Ljubljana. Don't know if either will remain. Don't know, don't know, anything... tomorrow off to go to Perpignon to seek art  with Margaret.

Yesterdays drawing so very piss poor that I'm going to have to consider if it's worth my while continuing this practice.
Posted by vanilla beer at 12:17 No comments: 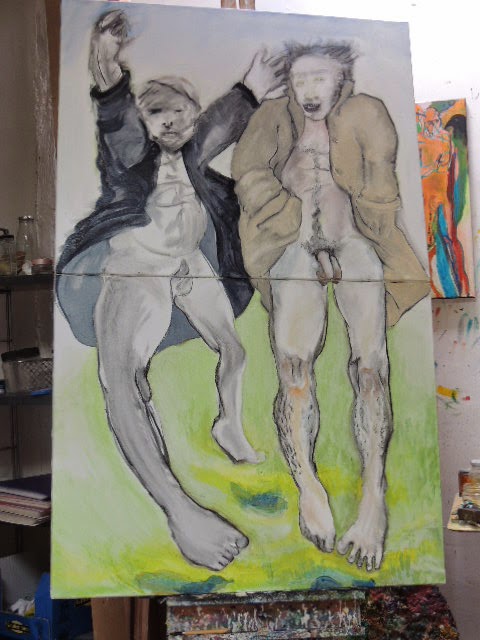 working early so falling asleep a lot - twice today, sit and fall into deep sleep - picture continues to give trouble. Painted in back ground, painted out background; perturbed that one of the figures is Kitaj. Cant get the elevated sense right. lalalala.
Posted by vanilla beer at 10:28 No comments: 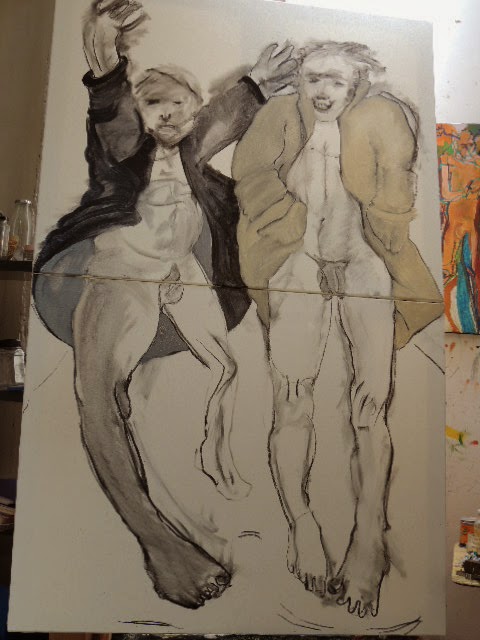 Its a start - moved on a lot since then, just haven't snapped it yet. I think its called Au Fond du Temple and its about mens working relationships. But I may be wrong.

Posted by vanilla beer at 23:18 No comments:

Spent yesterday avoiding the studio and telling myself that the thinking needed tuning as I hung around... discovered that the linseed isn't dry, hung around some more... did some preparatory drawing, looked through old studies.... eventually before going out for the evening hit the oily canvases with charcoal which is rather good fun as it gets agreeably smeary.
Discovered, at any rate, what I do NOT want -
Today is running around, Thursday rituals of shopping, cleaning and leaning French, plus I'm out to lunch. So I have no expectations except that the image is getting resolved at some level.
Posted by vanilla beer at 23:38 No comments:

Back in the studio - at last - did a bit of watercolouring in Ljubliana which saved my life - I really cant go for long periods without this proces, dunno why or what it means. Bit of drawing in London. Yesterday back at the life group in Esperaza; Fabienne modelling, good team, all well with the world. Very depressed by the drawing though, thought I'd learnt something but it seems I just flounder about  and hope for the best and yesterday it wasnt good. Taking it slowly, calmly. Today shaped up two canvases to make a big one, intending to do the Leaping men or more probably Leaping Man, have thin-coated them with linseed on top of gesso.
Lost the morning talking on Skype to Toby C. - he was due here on Weds for a week but is too ill - very good to talk about the matters that we both enjoy, currently William Blake and matters esoteric.
Dispirited though. Sense of failure overwhelming. Looked at the videos that Richard will put on new site, of a private view in 1995 and an open studio in  96 - so much work, so seriously meant, so futile:) Wonder what I thought would happen??  Do I work in expectation of an outcome?
Posted by vanilla beer at 14:18 No comments:

Been like an irritable zombie for an age - until, in fact, I bought a little pan of watercolours and some small pads of paper and knocked out some landscapes in Bled. No idea what I was doing - landscapes? Do I do landscapes? - but the hunger to act was desperate. No idea if they're any good but quite like them. And very much liked the change in me.
So today being in London I joined Peter Clossick to do some life drawing, took same kit (all I have) and it was catastrophic and Im an irritable zombie again :(
Model was called Robin; very good, an actor who understood poses. I think it was his confidence and assuredness that threw me. That and the others in Peters group who were without exception competent and in some cases bloody great. I reverted to childhood, did little messy things. Quite enjoyed it but fear I have cheated myself. On the other hand Im very tierd and not sure I have the energy for anything - breathing bad,fighting the lassitude is difficult.
Right now Im supposed to go to a gallery for a show of Peters - much like last night. Last night was at the Mall galleries and I was too shagged after getting in from Ljubliana. Think tonight is much the same though Im going to try to make the effort, silly not to. Have to get to Woolwich to buy some food so I'II see how I am when I gat there - plus there are those waiting for me in a pub -
Posted by vanilla beer at 09:44 No comments: