Been messing about in the studio. Cant find how to crop the pix but I daresay they aint finished. Had previously thought the Joseph and brothers ws done but wanted to alter the inexplicable cat. 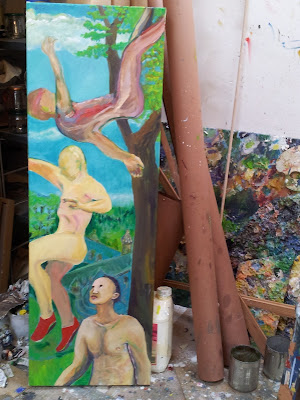 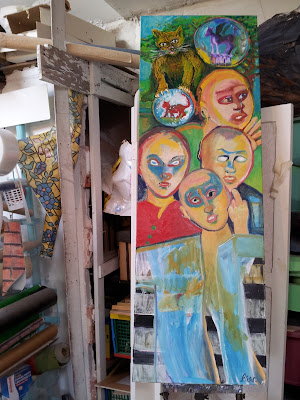 Posted by vanilla beer at 09:39 No comments:

Nearly made a days studio work but it's close to  6pm and still not there. Why not?
Well, firstly had to hit the phone and the computer to fix appointments and flight to London.
Look up insurance info for the lawyer who has decided to sue, finally.
Then it was 10 am and time to do a major shop - since I'm now going away Monday it seemed a good idea to get it done (=for Bob)
Then it was 12.00 and time to have coffee with Kat, Gert and Eliz before lunch with Bob. Then siesta.
After which Bob needed a hand with bits, I had to sew his jeans and my shorts, clean parrot cage, wash dog.
Now I'm going to  prepare dinner and maybe have a bath.
How the days zip past :)
Tomorrow allegedly clear.

Posted by vanilla beer at 08:52 No comments:

Dreaming about painting, does that count as work? If so, it was bad. I was forced to work in acrylic, nasty thin canvas, too flobby; painted a girl in a big white hat surrounded by flowers; thin paint, badly done. no structure or sense.
Actually got into the studio yesterday and could have cried if I'd had the energy. Its baking hot there, the orchids are happy but the work lying around is dreadful. Had thought to attack but ended up sleeping; too hot and I'm hurting.
Traded notes with Bernard when he was here - about  our expectations as young artists, what we were taught, what we'd believed about our legacies would be. Concluded that our lives were wasted but then there was no other way to live them...
In the meantime Peter G has had a glowing review in the Jackdaw. His trajectory is easily traced but not applicable to us, alas.

Reminded often of old Mr Otosky, who was so kind to me. Russian refugee way back when; still painting in Hampstead when I knew him. He taught me varnishes, managing stock room, studio practice. This incidentally, whenever I dropped in to say Hi. He reflected on a long life in art without bitterness and  indeed ended it on a note of triumph when he won one of the competitions with a surprising watercolour and plaster (on large paper) of the trojan horse. Rather confused the issue because after his death his son Geoff Orson thought he should be able to sell the studio full of work - something the artist had been unable to do. I put him in touch with some likely galleries but nothing came of it ( and this was in the day when galleries sold art to the public) Otosky was a colleague of Mark Gertler and that lot - no track record though.
Wonder what happened to all that work. I lost touch with the family.
Posted by vanilla beer at 23:37 No comments:

Given up all pretense of work. Bar the odd conversation about art.
Posted by vanilla beer at 23:54 No comments:

Yesterday , en plien air - watercolours, large and wet - St Ferriol, where friends have a large garden with stupendous views. I am getting better... I wouldn't exhibit them nor indeed show them to anyone, but I do feel more in charge of the material. Or its becoming more collaborative.

Off tonight by bus to Spain, Valladolid, where the cartoon book is to be examined. Nervous and excited, it'll be fun to see the 16 cyberneticians who are coming and see if the few ideas I have about direction are acceptable.
Posted by vanilla beer at 23:39 No comments:

Managed to get some drawing in yesterday :) Our guest Claer was happy to come to the group session so I got to go too... good time had by all. Fabienne did a long pose which was a pleasure, almost 2 hours worth of attention and reaction. Product useless but feel slightly more connected with my craft. Though as my brother pointed out yesterday (on the phone), its more of a hobby on account of I'm not doing any work.
Abut to do the Magrie application on the basis that by September when the show starts I will have 20-odd paintings back from Avignon that I haven't seen for over a year and won't mind invigilating. Bob has volunteered to be there too. The show is now juried which may or may not mean the standard will improve.
Talking of juries I have a certificate from The Art Box folk  for being accepted by the Basel artweek artbox project. Gosh.
Posted by vanilla beer at 00:41 No comments: