Popped into studio twice and straight out again - not working really agrees with me, feel calm and able and generally well. Wonder what comes first, the chaos of being me that leads to painting or the painting that leads to the C of B M? Should I test that by seeing how long I can stay away and what happens?
Still thinking, anyway.
1. vellum nude. Need to stitch it to a large light shade. This will back light it and bring that chilling resonance of the death camps, the uses the Nazis put human skin to. First, need to get the drawing right - central area, tummy, really doesn't work. Then need more incisions, more charcoal, then a turpsy wash using the iridescent paint.
2. Weeping woman. Become really interested in this. The only weeping women pix I can think of are kitsch virgins from the Spanish churches, catholic encouragement to women to bear sorrows silently. Piccassos Weeping Woman more fraught. Lichenstien, welling tears in cartoon strips.
Then what? I can nearly 'see' the pic. Have cut lots of faces out of magazines after realising that I must not tell a story - for instance, if the woman is old than she can be seen to experience whatever crap life has thrown- if shes black, she is perforce oppressed - but magazine pictures of young women of startling neutrality welling up with tears might do me.
Can I avoid kitsch? Weeping urchin-type Italian nonsense?
Still thinking.
3. Drawing. Stuarts automatic, evasive, furtive drawing. hmm.
Posted by vanilla beer at 13:36 No comments:

Email ThisBlogThis!Share to TwitterShare to FacebookShare to Pinterest
Labels: only thinking

-Been in London.
Saw Hockney prints at Dulwich; Bazelitz et al at the BM; Klee at Tate Modern. More interestingly spent an evening with Stuart, talking art and looking at his drawing.
Lots of odds and ends to tidy here so unlikely to hit the studio till Monday but have a headful of ideas which are rolling about.
More anon. Its extremely cold here.
Posted by vanilla beer at 01:51 No comments:

All a bit rubbish, really - mostly cleaning up having junked the things I was working on. Yesterdays drawing not too bad, Ryan modelling, but nothing learnt. I dont know what Im doing and I dont like whats happening.  Hey ho
Off to England tomorrow, doctors and a friends wedding. Plan to see as much art as poss.
Posted by vanilla beer at 00:15 No comments: 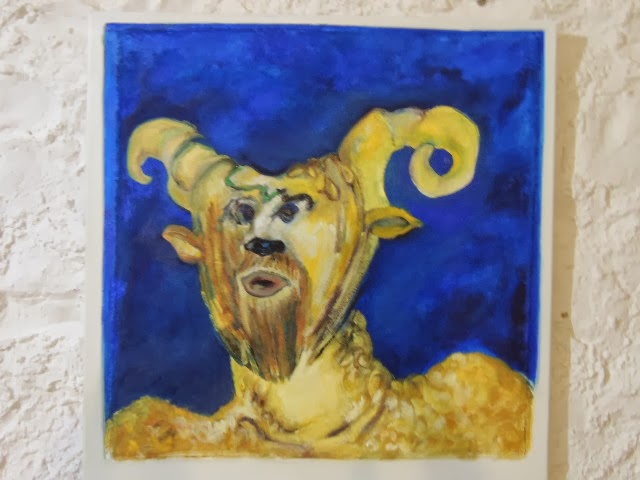 Think this is finished. If I can find a convincing french phrase meaning 'view from my window', it'll do for the toques et clochers annual expo. Enjoy its air of old-world bafflement on seeing the new. 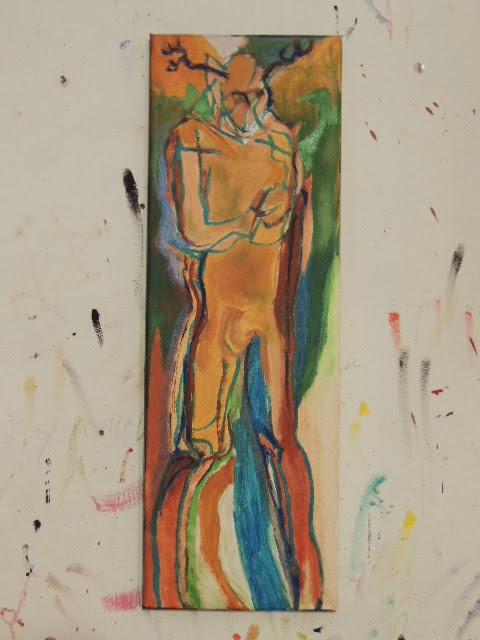 Think this is finished too, been fiddling with it for months. Another old-world figure baffled by the new. Maybe I'm in trouble:)
Posted by vanilla beer at 09:59 No comments: 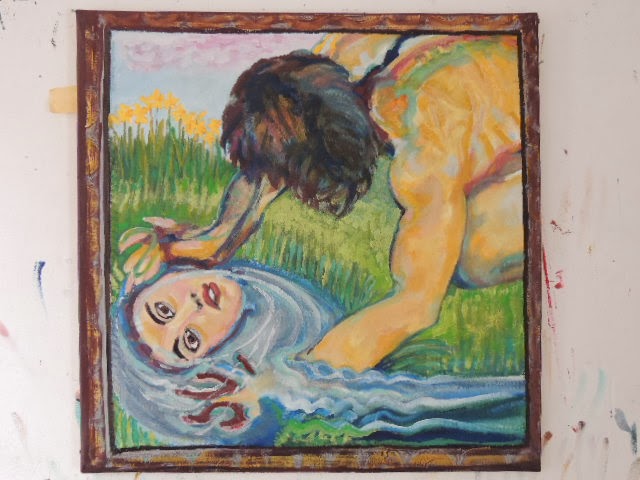 Been able to press on most mornings, at the cost of the afternoons - works OK. Currently playing with these two images, the Narcissus from a drawing of Marie which need radical change only don't know what and the squinting demon which came from some drawings which may be called 'automatic', in that I do a load at once with a blank mind.
Did a version of him for the RCA Secret thang - this is better because those blues are sooooo beautiful.
Life drawing on Monday a waste of time BTW. One watercolour, maybe. 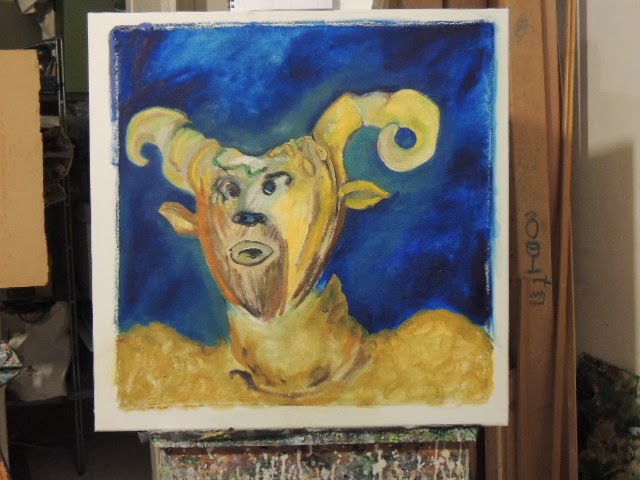 Posted by vanilla beer at 23:47 No comments: 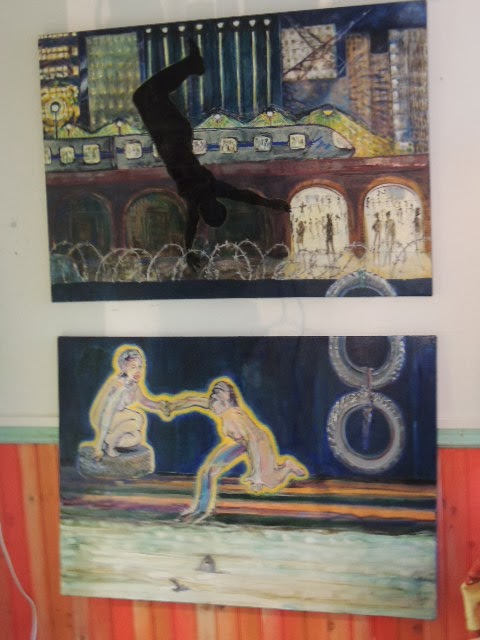 Finished - or at any rate, stopped. Difficult to read the black figure in this photo though come to think of it its probably difficu;t to read in the painting - wanted an absense as much as a prescence, something that stopped the lights and made for a better structure. The whole thing has done everything I wanted but it lacks magic - its meritricious while at the same time looking without skill. Might look better in a day or two.

Started a small picture of Narcissus soley because I had the perfect study (Marie pretending to crouch over a mirror) and a pot of little daffs.

Tierd and dirty, have an hour in hand for a bath.
Posted by vanilla beer at 09:34 No comments:

...I dunno why I persist. It was Fabienne modelling and a decent team drawing - Roger, O-B, Jean-Noel, Michelle,Tim - nothing good came of it at all. Even my techniques for making mistakes are formulaeic. This afternoon is running errands about the countryside with Bob so nothing can be done. On the plus side, time to think this through.
Done the RCA Secret postcards, now find that the thing is being sponsored by a litigation law firm. Do I agree to this? Bah.
Posted by vanilla beer at 03:45 No comments:

Finished  les têtes coupées yesterday - not entirely satisfactory but *-enough-*. This morning bounded up to see the postcards I'd made for the Royal Academy annual fundraiser, which I usually enjoy; they weren't as nice as they'd seemed last night. But they're OK, they'll do. Stymied by the T of the G which I propose to ignore until I perceive its flaws, whatever it is that ails it.
Two small canvases with canvas mounted on top (canvas too damn fine otherwise) and four larger, ready to go - two fresh notebooks of drawing. And life drawing tomorrow. Hmm, gods in her heaven and all's well with the world
Posted by vanilla beer at 08:54 No comments: