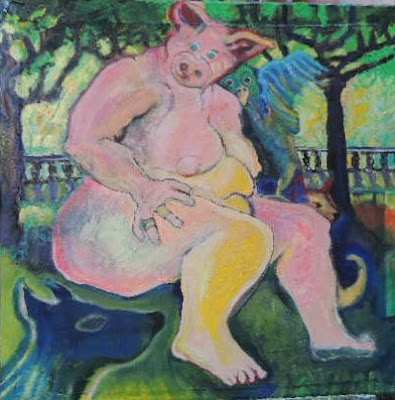 done! - I think. Will check tomorrow.
Posted by vanilla beer at 09:27 No comments: 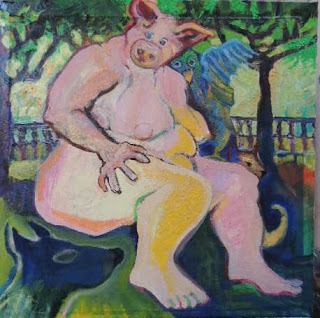 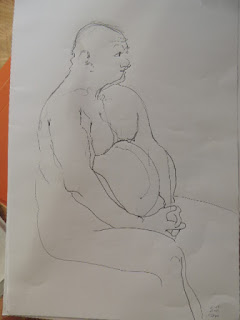 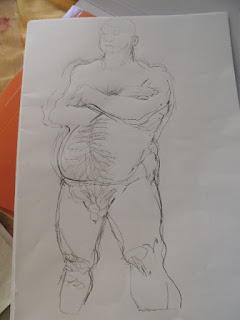 Morning painting - break to go life drawing, chap called Alain - then back to painting which is nearly finished, but not yet. Hand wrong, feet wrong, pig face wrong and anyway needs dappling. Somehow.

Alain was modelling for the first time and was ill-at-ease and I found that I was scared. He is bald with a neanderthal build, the type that you avoid on the streets of south London.
Of course, he is charming, alert and interested and a very good model. Hope to have anothergo.

I'm in Grussion plage next week so will miss the session.
Musn't moan :)

Painting going really well - have three on the go, in various degrees of completion.Such a pleasure. Have suspended doubt and anxiety for the immediate.
Think the August exhibition has been a a bit of a turning point.
Though of course I should be working on long drawings and not having this much fun. On the other hand, Ounouh wants 40 by next August, maybe.

Have been slightly derailed by the local political situation, where by some mysterious fluke I am numbered as the pivot in the current difficulties here; to whit, the mayor has lost his support and must resign and hold an election unless I (specifically, because of the number I respresent on the oppositions list) jump ship and join him. Bafling. Anyway, pressure has been applied - and on my friends, to 'talk' to me - made me very uncomfortable. Saying no to anyone who comes near me for anything now.

Posted by vanilla beer at 09:16 No comments: 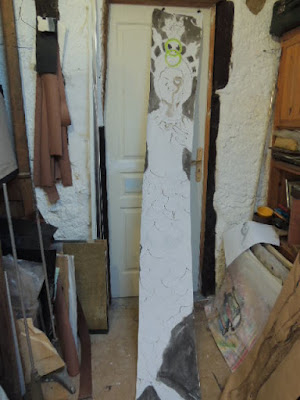 not much to show for a few days work.... junking a lot of stuff. Have started painting on over painted canvases, its terrifying, I've forgotten how to do it. Greatly disturbed by plans, other peoples; looming visits, mechanics of life. 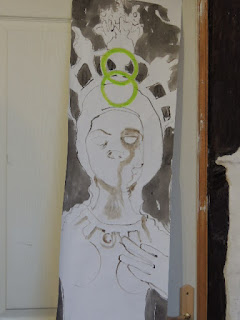 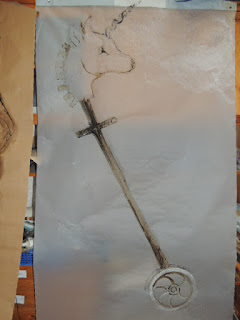 Posted by vanilla beer at 03:10 No comments:

Even been doing housework rather than face studio... but actually that means I'm getting ideas sorted. Current issue is to get l o n g drawings done, because of the shape of the gallery - have done 8 or so of which 2 are useful. One is def interesting. The other maybe.

Was reading Gombrich in Aspects of Form (which I see was issued by the ICA in 1951, bloody hell) His essay Meditations on a Hobby Horse caused me to think on't, mostly because he makes good use of the totem but never once mentions Dada, which to me is strange. Maybe Dada never touched his shore; maybe he didnt know that the French for hobby horse is dada. Maybe it just wasn't relevent to the point he was making (it wasn't, BTW)

Anyway on thinking realised that for me the basis lies in the wheel - the sign of light - ascends through a cross - the sign of many things but chiefly the begining of interaction - and arrives at the mystical head of a unicorn. Or anything really but I like the non-existence, sense of things lost, possiblity of discovery inherent in the unicorn. And the sexual symbol of the horn, natch.

Thats what l've been doing.

The one that works, so far, is taken from old photos of a goddess shot on a portable camera in the early days and developed in the woolwich photo shop, from a collection of greek/roman/egyptain sculptures found underwater and exhibited in the Grand Palais in Paris about a decade ago.
Due to some camera glitch, the goddess has two rings of green light over her face. Nice.

Theres not enough real info in the photo so I made most of it up, ending in  a mermaids fish-tail.

In the meantime the book is at the printers :) Started shaping up a guest list for the show and know what to do about the invitations. Got lots of time; precisely, 2 months.
Posted by vanilla beer at 09:39 No comments:

Began work, as I thought in ernest yesterday; started at 9.00 and by 11.00  ws knackered. Again in the afternoon; but gave up in favour of a brisk walk and a bath. Still drawing, trying out ideas. ONE looked promising. I ferked it.
Dreams crowding in again.
Being awake is slightly hallucinagenic.
Today off to PecheLuna for a couple of days.
Posted by vanilla beer at 22:54 No comments:

.....most of the installation went off yesterday, looking rather good I thought at the time but that may just be relief at getting shot of it.

Now editing the catalogue which must be ready to be signed off tomorrow.

Bob likes it - found it moving. I don't see why nor do I know if this is a Good Thing. But too late to make changes now :)

When thats done - and Bob leaves, Monday - I have to knuckle down to the drawings I have in mind.
Posted by vanilla beer at 01:49 No comments: