Immortality suit coming on but laboriously and I'm not sure its worth the effort. Cute idea, hey ho. Off to the Beaux Arts in Carcassonne today, maybe clear the mind.

Posted by vanilla beer at 22:59 No comments: 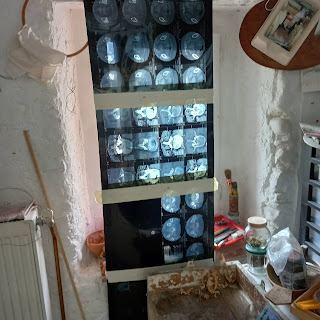 Trying to make a jade immortality suit - without using jade, natch - beginning with the armature which is to be of Andree Bonnets x-rays. (Before she died she gave me her life-time collection.)

Staples no good so sticking with no-nails glue - perfect - and plaster board bandage which I like for the little motif that runs along it... 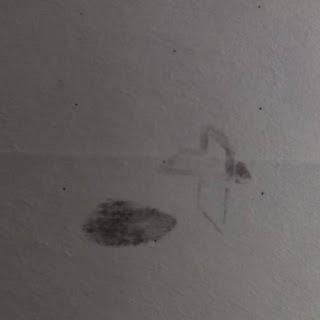 plan to make it small. Ish. I have seen one, can't remember where - America I think - and was struck by its littleness. Which is convenient.

May have to stuff the x-rays once they are in shape. Can't think with what. Will then panel with blister packs. Origamiesque, trying to get the nose in :)

Posted by vanilla beer at 03:43 No comments:

An agreeable day slowly pottering in big heat, nothing to show for it but clean brushes and an only slightly grubby palette.

What with admin and stuff I cant see me back in harness until Weds so the rest of today I can finish the cleaning.

Posted by vanilla beer at 00:03 No comments: 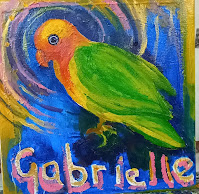 Funeral portrait of Gabrielle done - to join the other dead pets portraits in the dining room at no 11.

Finished with Orpheus and herself.

Going through rock and associated drawings.

Time for a clear-up.

Posted by vanilla beer at 00:30 No comments: 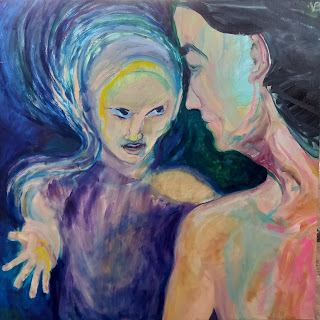 Fought to find that pink on Orpheus. Had to show the rose-red dawn and the beating blood and I was well pleased with it - until I realised all the other values had to be tweaked and then I started overworking and the dynamic of the thing was going, much like Eurydice herself indeed. So stopped.  Might re-do on another canvas.

Bashed out the funeral portrait of our little  dead bird, but legs so wrong will have to change.

Brother-in-law arriving this morning, having driven all night... next few days will be filled. 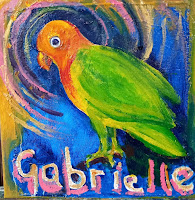 Posted by vanilla beer at 22:24 No comments: 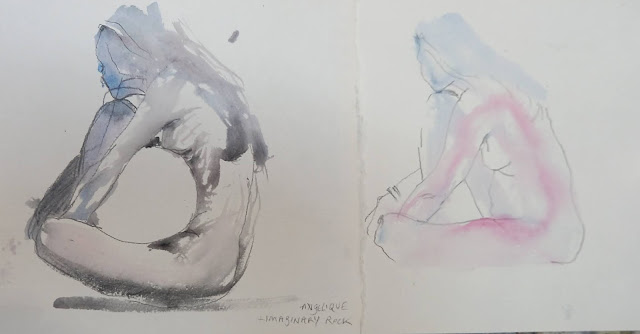 Yesterdays biggest challenge was not letting the model see that I was drawing large rocks on top of her. Angelique is diabetic and had meds pumping into her so the rock thing could have looked a bit literal, that which she has to bear and is being crushed by...

as ever, ambivalent about it all. Hope to use her again and focus on her rather than my own directions, sigh.

Bernard is much iller , must be on chemo for the rest of his natural, and last night Loretta died after long chemo intervention. Which on the other hand caused her to live long enough to see her grand daughter. I suppose one just carries on until the time comes to join them. Choices???

Posted by vanilla beer at 00:18 No comments: 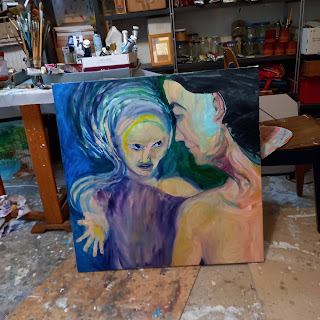 Done more on this since the photo and now only want to big up light on Orpheus and darken the background of Eurydice - worried that I was channeling my inner Munch but I'm beginning to like it so don't care.

In the meantime some ideas about developing the ancient rocks theme. Off to find model to impose them on.

Prickly eyes, breathless, lala. Might just go back to bed. Very hot here and the forecast is for hotter.

Posted by vanilla beer at 00:21 No comments: