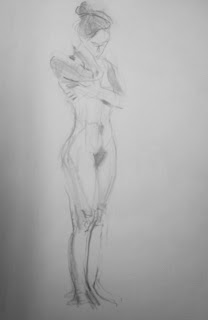 Drew yesterday; first time I've been able to do a two-hour session for a very long time. Good model, Clare from Puivert, and only 5 other artists, all focused and serious, so it went well. Im pleased with nearly all of my results though dont know why they've gone out of focus.
Today off to stay with cousins near Avignon and tomorrow will collect pix from Ounagh.in time for the Magrie show.
Very nearly in a position where I can start work in the studio.... nearly.
Posted by vanilla beer at 00:28 No comments: 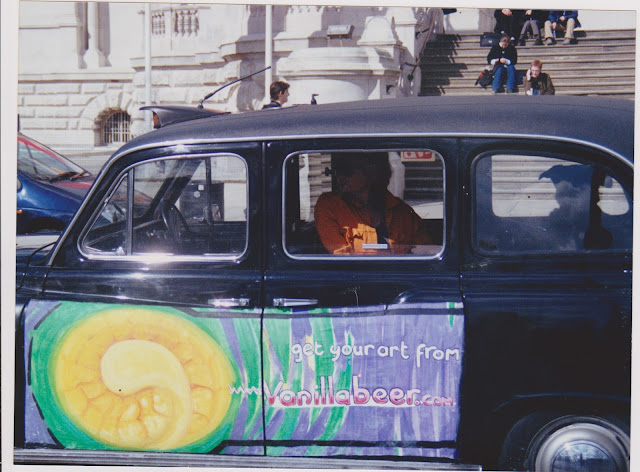 Rediscovered this photo of Sams taxi outside the Tate, with me and wonderful dog Kevin in it.
No idea how old it is, but it is very old. Ian did a degree in IT at Greenwich which ran the second IT course in the country... people were waiting to see if it was a flash-in-the-pan! He made my site, big and complex, when never an artist had one. Very classy except that hardly anyone used computers and no-one bought from them. And in the fullness of time and inexplicably, the site went awol - was lost to others who presumably bought it.

Lost the dog, lost the taxi, lost the site - still have the jacket though :)
Posted by vanilla beer at 00:54 No comments:

Nada... got 4 Dutch artists staying here and they are about the place doing art as I scrabble about with armfuls of ironing and washing. Today another 2 arrive for chez Francois. Its far better  to be a rentier than an artist in terms of dosh but its pretty boring. Trying to resolve a couple of pictures in my sleep.
Failing.
Bob away for a week from tomorrow which lightens the domestic load; maybe, perhaps, I'II do some work. On the other hand, got a few good books on the go.
Posted by vanilla beer at 23:26 No comments:

Yesterday in studio !! Fighting my way through cobwebs... (really)
Nothing accomplished, just re-connecting.
Actually I did manage to pack the pic for the NOA, marvellous piece of work. Found a red box with a perspex lid that took him pretty well, leaving him looking out of the clear side. If there are marks for packing, I'm in.

Heard yesterday I've been short-listed for the NOA which is on one hand encouraging and on the other, ha, been there before... this time the brothers-in-law have agreed to deliver the pic which will save a large pile of dosh. While I continue to not hold my breath, in a nervous anticipatory sort of way.

If you are one of the two people who sometimes see these postings, will you vote for me?

There's a site with the 500 shortlisted pix and they want 'the people' to make a choice by voting. So if I get enough votes, I get exhibited despite being rejected by the judges. It's up on facebook and friends have been helpful. I've insisted on saying that its not as bad as it looks and this wasn't meant to be a joke -when I dug it out of the garage I was amazed at how much better it was than the photo, on account of the irridescent paints which really don't reproduce well...