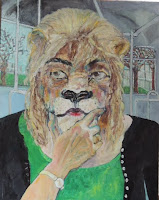 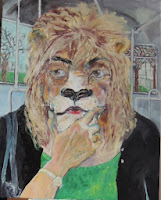 bloody awful picture despite many hours of putting on and taking off paint.
I was trying to describe and understand a time when I was turned into a lion in the face of becoming an accident of medical happenstance - falling into the hands of doctors, who told me things I didn't know about my body.
Sitting on a bus by the hospital surrounded by people in a similar, rather hyper-real, state. The autumn air very clear. 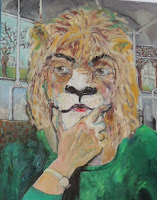 Next I dream the renaissance lion. 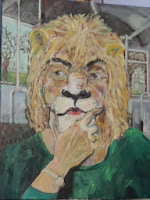 Find now that I have muzzled a beast with a hand ringed with a wedding ring and a wrist tied by time.

The is no lion-ness there except perhaps the  resignation of an animal unsure what to do. But there is an intelligence that belies that.

Bloody silly picture. Its the '70's haircut that's so horrible! Very tempted to take out the bus - isn't working pictorially, makes the whole too chalky - and use the curves to make an italian faux renaissance setting.The only thing I have liked in two days of work is the shift of the shoulders. May be able to build on that.
Posted by vanilla beer at 00:59