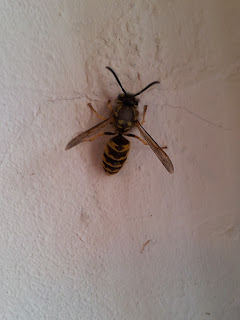 The unknown wasp....handsome chap.  yesterday talked with Toby Churton on Skype, who said call the exterminator (??) and proceeded to argue about insect life in the Bible; then Philippe Serpault - who dropped in and had previously worked with bees in Nicaragua - who recommended getting a 'bomb', the toxic thing the french let off in their houses to kill all insect life before going away for a fortnight.
I quite like them.... perhaps the fact I've been wearing black trousers and an ochre jumper since I got back makes them think I'm one of  them, because (so far) I've not been stung. I see no reason to kill them all.
On the other hand, doing no work. Very nearly organised to recommence the cartoon book in studio 2, but cold (open windows studio 1). Better just knuckle down, I guess.
Posted by vanilla beer at 00:30